The face you know best is your own.
From the time you learned to touch your nose, you’ve come to know every facial curve under your fingertips and your reflection in every mirror surface.
It is the reason artists are instructed to draw a self portrait before attempting another’s. 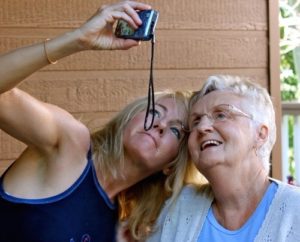 Oblivious to this kind of instruction, I drew portraits as a teenager, without ever creating my own.
I never had a desire to.
For one thing, I know my own stories.
In the faces of others, I saw so many, and hoped to share those stories with the world.
At 25 I began to paint landscape, a universal subject with powerful potential to connect humanity to nature. 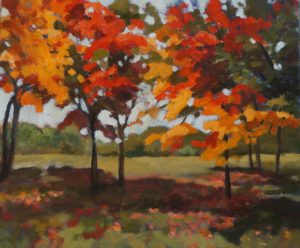 So when Julia took this photo in the boreal, I never dreamt it would one day be my first self portrait. 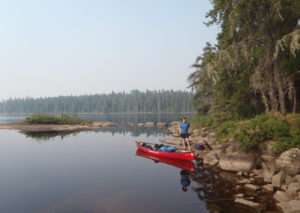 Standing across a wee bay from one another in the morning sun, we were capturing photos for documentation on the most wonderful expedition experience of my life. 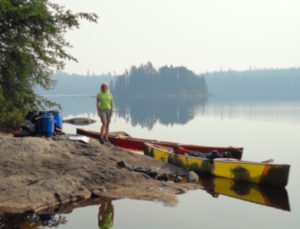 I recently remarked on my ‘carefree’ look, awkwardly balancing on a narrow rock ledge, “That’s me weeks without a shower in the wilderness!” Julia replied ‘It was Day 2.”

It’s a beautiful photo composition, with wonderful paintable elements. You have seen this island in a few paintings, and that lovely curve of rock.

What inspired me to paint its entirety, scruffy character & all, isn’t a sudden desire to study self portraiture.
I was filing photos when my Painters Keys subscription popped up Oct. 12th.
Sara Genn’s moving letter “Ninth Street Women” motivated me to completely switch gears that day.
( click here to read the full letter)

….“Elaine de Kooning had debuted with 71 other artists at the Ninth Street Gallery in New York. The show featured eleven women and sixty-one men, including Elaine’s husband, Willem de Kooning, plus Robert Rauschenberg, Robert Motherwell and Jackson Pollock, the husband of another exhibitor, Lee Krasner. The month-long show launched a new wave of up-until-then virtual unknowns — loft squatters soon to become the Modern Masters of American Abstract Expressionism. Well, the men were soon recognized, at least. The women lumped along on a circuitous path as the at-times painter-wives of stratospheric art stars, with another ten, twenty, forty or sixty-plus years to go before establishing their own places in art history.”..

Today, “In terms of representation in commercial galleries, women hover around the 30% mark, with women continuing to make up only 3-5% of museum permanent collections in the U.S and Europe.”

Tears quietly blurred my eyesight & I knew what to paint. 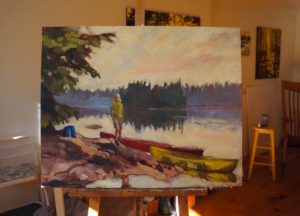 1. When including a person in the landscape it’s best to have the figure facing away, so the viewer can picture themselves in the painting. Figure facing the viewer may be thought of as confrontational.

2. Thou sunglasses may be glam in fashion photos. In a painting, they block insight into the figure. Sunglasses off, you invite the viewer in, sunglasses on.. not so much.

3. I painted the island in the middle. A compositional no-no.

It’s powerful.
The character element makes no apologies, quietly demands attention.
“I am here to stay” she says wordlessly.
Close connection of the canoe & figure may be viewed as an expression “Paddle your own craft, forge your own path.” ( cue fist pump)

It felt cathartic & was painted in joy.

Dedicated to the women who stayed the course, and continue to in the world of art.
To name a few Canadians, Mary Pratt (who was told there could only be one artist in the family, her husband.) Kathleen Morris, Anne Savage & those of the Beaver Hall Group, Daphne Odjig, Emily Carr, Maude Lewis, Dorothy Knowles, my friend Julia Hargreaves who captured this moment so well, & Mom, creative brave heart & art champion, ( first photo)
~
I’ ve been thinking about canoe names, what are your suggestions? Bertha & Agnes?

P.S ~ Sara’s Dad Robert wrote about pay inequality of women artists in comparison to men. It’s still an issue, with “women earning 81cents to every one dollar made by men. Women working across art professions earn 20,000 less than men.
In 2017 the University of Luxumberg (thru over a million records) found works by women sell for 47.6% less than work by men.